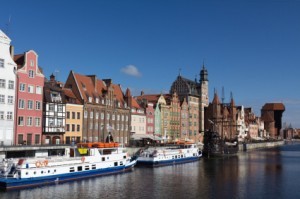 Gdansk is very different from other Polish cities because it has a rich maritime history that dates back to the 7th century.

Poland has experienced many drastic changes throughout the 20th century, but its most beautiful sites remain the Town Hall, the Medieval Port, the Main Town (Reconstructed after WWII), and the Green Gate.

As Poland moved towards capitalism in the early 1990’s, Gdansk has attracted major IT and finance businesses to an economy that has been majorly dominated by industries in the energy and shipbuilding sectors. As a result, the demand for teachers with a reputable TESOL certificate has been on the rise. Poland is one of the few European countries that welcomes native-English speakers who do not have a EU citizenship, and is especially welcoming to TESOL graduates from Canada and USA.